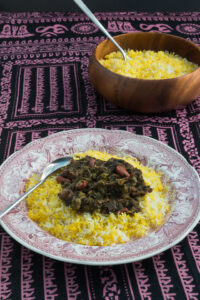 I am am happy to see Persian cuisine getting it fair attention these days, as it is among my favorites. I had so many Persian friends during my college days in the Midwest and many of them were studying in exile as their country was in post revolution turmoil.

I recall the savory stews with green hues from spinach and herbs, crispy rice and so many other wonderful dishes. That Persian tradition was reintroduced into my life in when I arrived in New York became familiar with the dishes of the Bukharan-Russian Jewish community. Although Uzbekistan and Tajikistan pertained to the Soviet Union, their roots are in Iran and they speak a derivative of Tajik Farsi.

It is so amazing to sit in front of a plate of this dish at my friend’s table in a New York, Russian neighborhood. The spinach, legumes and chicken that has been in my friend’s family for generations; stemming back to Iran, made it all the way to Rego Park, Queens, where it is also serve it atop the familiar the aromatic rice with crispy bottom to the girl from Ohio.

Dont let this recipe intimidate you because it’s a flexible stew of beans, spinach or whatever greens you have. Any meat will do but the fattier the better as it will hold up in a slow cooker (when time permits) or in the pressure cooker (what I will do tonight).

Recipe adapted from Food and Wine Magazine
3 tablespoons canola oil
1½ pounds boneless, skinless chicken thighs, cut into 1-inch cubes (you can also use lamb shoulder, brisket or short ribs)
Kosher salt and freshly ground black pepper, to taste
1 tablespoon ground turmeric
1 large onion, finely chopped
1/2 cup of the top green part of a leek, washed, dried and finely chopped
2 cups minced parsley, plus more for garnish
1½ cups minced cilantro, plus more for garnish
4 cups chicken or veg stock
1 tablespoon dried fenugreek leaves
5 dried black Persian limes (if you don’t have them, you can squeeze the juice of a lime into the soup at the end along with a few kaffir leaves–it won’t be the same but it will brighten the dish and be delicious)
Two 15-ounce cans of beans of choice (kidney or butter beans, garbanzos, pinto, drained

1. In a large pot or Dutch oven, heat the canola oil over medium-high heat. Season the meat with salt and pepper, and add to the pot. Cook, turning as needed, until browned on all sides, 8 to 10 minutes. Using a slotted spoon, transfer the chicken to a plate and set aside.

2. Add the turmeric, leeks and onion to the pot, and cook, stirring often, until softened, 5 to 6 minutes. Add the parsley and cilantro, and cook until wilted and dark green, 5 minutes. Return the chicken to the pot and add the chicken stock, fenugreek leaves and dried limes.

3. Bring to a simmer until the chicken is tender and the liquid has reduced, 25 minutes. Halfway through cooking, pierce 3 of the limes with a paring knife.

4. Add the kidney beans and cook until warmed through, another 5 minutes. Divide the stew between bowls and garnish with more parsley and cilantro. Serve with pita on the side.