This summer an intern from the Ukraine arrived bearing gifts. One of the presents was a bag of dried buckwheat grain which is a staple in Eastern European cooking. It is flavorful, substantial and economical. Not only is it delicious on its own or with milk as a cereal but it is a great meat-like stand-in with bow tie pasta or “kasha varnishkes”. We adapted this dish from a New York Times recipe but added fresh herbs and mushrooms considering we are on the North Fork where we have a great variety of mushrooms. Serve this with a fresh summer cucumber salad for meatless Monday and wow your family tonight! 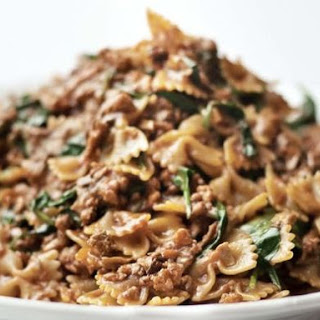 Put onions in a large skillet with a lid over medium heat. Cover skillet and cook for about 10 minutes, until onion is dry and almost sticking to pan.

Meanwhile, bring a large pot of water to a boil. In a separate, medium saucepan, bring 1 1/2 cups water to a boil, stir in the kasha and about a teaspoon of salt.

Cover and simmer until kasha is soft and fluffy, about 15 minutes. Let stand, off heat and covered.

Salt the large pot of boiling water and cook noodles until tender but still firm. Drain and combine with the onions and kasha, adding more oil if you like. Mix in the fresh dill and season with salt and lots of pepper and serve immediately.