It was a difficult selection process considering how many amazing women make up our unique region but as we could only select seven for this week-long series, we started with these seven women.

The selection of women being featured ranges from farmers to writers, winemakers to yoga teachers and community activists, all of whom have been influenced by our unique region and whose work is representative of our community.

Karen grew up in the Great Lakes region of New York, playing with frogs and frolicking among the aquatic life of the area.  She became further enchanted with this world while watching episodes of Jacques Cousteau which is what eventually led her to take a class abroad in marine zoology and eventually to pursue her studies at Southampton College in biology with a concentration in marine science.  Her studies, hard work and love of marine life resulted in her oyster farm, Peconic Pearls in Southold.

Question and Answer:
Tell us about the journey that has led you to your current career?

After I finished college I went to work as a research technician for a professor at Stonybrook University, who was studying the economic viability of shellfish hatcheries and exploring the impact of the cost of the seed for the shellfish on the industry.  This is where I worked there for 3 years and this job led to another role in the same industry at the Bluepoint Company where I was in charge of growing algae.  However, the low pay and lack of equal opportunities led me back to work for another woman at Stonybrook.  It was at this point I realized that I wanted to become an oyster farmer. When I decided to start my business I worked several jobs from working in a shopping mall and cleaning houses on the side, in addition to my full time job so that I could buy my first boat and move forward.

When considering that we are celebrating international women’s day, how do you feel your career choice can inspire other women to improve their lives and their communities?

I feel that running my own company gives me the opportunity to be a role model for young women who might feel insecure about excelling in math or science or “being the smart girl”.

Please share your views on the economic viability of your career choice and how can it be possible for other women to support themselves in the pursuit of their aspirations?

I feel that any aspiring entrepreneur needs to understand that sacrifices need to be made to pursue non-traditional roles or to start their own business.  If you educate yourself in the field you want to enter, you will find your way. Also it is important that we introduce our youth to the business of farming so that we are nurturing the future of the agri-industry in this country.  Our schools have a responsibility to include agriculture into the curriculum.

What advice would you give your younger self?

I would tell myself to be yourself and not compete as anyone other than yourself.  I would also say to own your own image without being brainwashed by what the media expects us to look like or be like but rather than to be honest about who you are and find you way to success within that.

To see the featured recipe Sopa De Tortilla, click on magazine below. 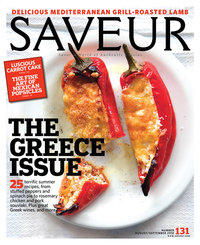 I have been cooking in my kitchen at The Greenporter Hotel for almost eight years now. I was always a cook at heart even though my education and career took me in other directions. I began building this kitchen in March of 2001 and worked on every corner of it's design. Having a kitchen on the North Fork of Long Island is every chef's dream. Here you have local products sprouting in farms all around you. Whether it is local oysters, duck, mushrooms or Striped Bass, it's all fresh and even more heavenly accompanied by a glass of local wine. We cook using these local ingredients year-round. In the winter you'll find us here on the weekends and from Memorial Day to Labor Day you'll find us seven days a week. Let us know next time you stop at a farmstand and pick up some really beautiful locally grown or harvested goodies and SEND ME A LINE! I'll be happy to post some recipes for just for you.