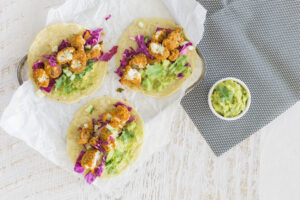 I lived in Mexico City for two years and loved visiting all the mom and pop taco stands in the surrounding neighborhoods.  Whether I ate tacos in the bazaar in San Angel, or from the street vendors in Condessa or the cantinas around Plaza Garibaldi; the fillings were diverse and the flavors were explosive.

Some of my favorite tacos were the ones filled with vegetables and legumes. Sliced cactus called “nopales”, a mushroom fungus called huitlacoche, sliced peppers called “Rajas”, con crema, a type of créme fraiche-like cream, among many other garden ingredients.

You can make veggie tacos any time of year and during colder months, hearty vegetables like cauliflower are readily available and make for a substantive filling for a Meatless Monday meal. Horale!

Line a baking tray with parchment paper and preheat oven to 350ºF (180ºC).
Mix almond meal and ground spices in a medium sized bowl to make a crumb.
In another bowl, mix together almond or coconut milk, brown rice flour and lime juice to make batter. Mix well.
Coat cauliflower florets in batter, a few at a time then toss in almond meal spice mix.
Bake for 25-30 minutes or until golden brown and crisp.
While your crispy cauliflower is baking, drizzle your avocado with EVOO, salt, lime and cilantro for garnish.

Prep your Asian slaw and allow to sit while cauliflower bakes.

Once you cauliflower is crisp, remove from oven, assemble your tacos and serve with a garden margarita or mojito.