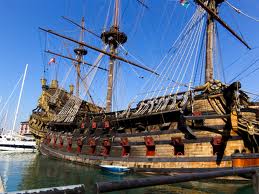 The cuisine of Genoa demonstrates clear influences from its Mediterranean neighbors including Spain, France and North Africa. If you’ve ever been in the Languedoc Region of France, you’ll see the Spanish bull fighting rings in the towns of Nimes and Perpignan and in Genoa you will come across many French dishes given Italian names. Thus, the cuisine of Liguria, to which Genoa belongs, is a mosaic of the many cultures of the coastal Mediterranean. Its culture stretches east towards Asia and south towards Africa and is representative of its history of maritime trade and the many invasions.

Just like Christopher Columbus, the history of Genoa is sordid and alluring! So when you think about Genoa this Columbus Day weekend, savor the controversy that surrounds the origins of Christopher Columbus’ homeland – or Cristobal Colon, as he is called in Spain.

However, on Columbus Day, we should see the glass “half full” and celebrate the occasion! Let us think about how much the world has changed, as Italy was not yet even a country when Columbus first set sail and did not become one until 1861. And recall that Spain had just become a country in 1492. No matter which country Columbus called home, on this day, we honor the explorer for his voyage to the Americas on October 12, 1492. So enjoy Columbus Day, as you try this salad adapted from the Genovese recipe, Insalata a la Nocchi.

Slice the celery and julienne the chicory, then combine them in your salad bowl. Rough chop the nuts. Whisk the olive oil and lemon juice together in a small bowl, then stir all the ingredients into the salad bowl.

Combine everything; season with salt and pepper, olive oil, and the lemon juice, and serve immediately – before the pears discolor.

Serve paired with a bottle of Tavola from Raphael Vineyards to complete this truly Genovese-inspired first course!