I love Thanksgiving and Pumpkins and anything made with Pumpkin but often times these are not the easiest on our waistlines.  This is why I love this pumpkin dessert which I serve instead of pumpkin pie for Thanksgiving or other special autumnal dinners.  I use Carriage Pumpkin or Cheese Pumpkin which is smoother and less fibrous than other pumpkins.  I also substitute Agave syrup which has a lower glycemic index than sugar and between this and the lack of fattening crust on a pumpkin pie, you get a flavorful yet light dessert for you and your guests. 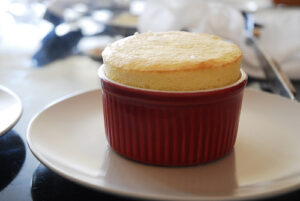 Beat egg whites in medium bowl until stiff. Set aside.

Fold 1/3 of egg whites into pumpkin blend. Continue to fold in egg whites 1/3 at a time until egg whites are completely folded inches.

Pour pumpkin/egg mix into cups until almost full (leave about a half inch or more at the top as they will rise).

Place cups on baking tray and put into oven.

DO NOT OPEN OVEN TO CHECK ON SOUFFLES!  USE OVEN LIGHT!

Top with a drizzle of real maple syrup and some pecans.