This vegan soup can warm the coldest of winter nights. Hearty and nutritious, it will leave you satisfied with minimal prep time and will taste even better the next day. Lentils have been consumed for centuries, having sustained cultures across continents for thousand of years as one for the original sustainable and transportable food sources. Not only could they be preserved and propagated by drying and planting, they could also be transported across oceans and deserts to feed the armies and workers who defended crowns and built roads and pyramids. This inexpensive legume contains a great deal of protein, more than almost any other legume, as well as dietary fiber, vitamins B1 and B9, and important minerals like iron. Combined with the immune-boosting ginger, healthful cinnamon, and the good fats of the coconut oil, this soup is in line with your culinary and healthful resolutions for the New Year. 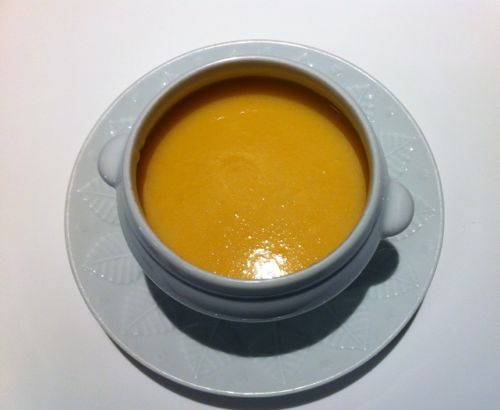 Soak the lentils overnight, or before you go to work in the morning.

Once softened, drain the lentils and set aside. When ready to prepare, heat coconut oil in a large pot over medium heat and sauté the onions and carrots for about 5 minutes, then add the ginger, garlic, and cinnamon and allow to cook for another 2-3 minutes. Add a splash of garden stock to assist in softening. In a separate pot, bring the lentils to a boil and summer for 30 minutes without any other condiments. Legumes take longer to cook if you add salt or other ingredients. Once the lentils are soft but still intact, add all the other ingredients and cook another 10 minutes. Simmer for another 10 minutes after that, if still hard.

Set up a station to purée. Resist the temptation to overfill the blender, (fill less than halfway), and purée the soup in batches, pouring puréed soup into a container while going on to the next batch. Have extra garden stock or a few cubes of frozen garden stock on hand to add to the soup if too thick. Once you have a creamy but not porridge-like consistency, taste for salt or spice if desired. When ready to serve, heat the soup in a pot and check the consistency one last time while adding two tablespoons of apple cider vinegar and a healthy drizzle of extra virgin olive oil to finish the soup. Top with fresh cilantro, and serve alongside a simple green salad and a piece of crusty, wholegrain bread from the Blue Duck Bakery.