Like many Americans, I have a love affair with pizza. From thin crust, Sicilian, Gramma, and Margarita to down and dirty college pizzas of my youth like Hawaiian, buffalo chicken or just your average New York slice on the run, it’s music to my ears.

So just when I think I know every place to get the best of what I like, along comes Nicoletta in the East Village. It is the modest member of the AltaMarea family and brain child of chef Michael White of Marea and Ai Fiori. 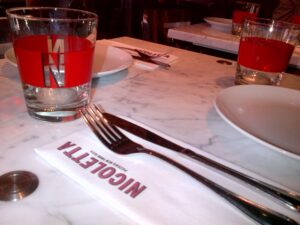 Despite the fact that this place is in its infancy (only three days old), the food service and presentation was good other than drinks arriving slow to the table (uncharicteristically leaving money on the table Mr. Fakahany!). 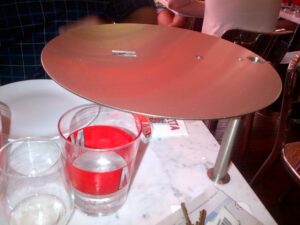 We had some small dishes including Pollo al aceto, a “confit” fried chicken, one piece for $10 with a spicy sauce combo reminiscent of buffalo wings. The Mare salad was tiny but tasty at $12 with bits of lemony-garlicy octopus and scungilli. Our friends had the meatballs, Polpete, ($10) and the Romana salad ($10) of Romaine and other lettuces presented in a Caesaresque manner.

The pizzas ranging from $17 to $21 were delicious in their own way. It was great to read that the chef is calling this style of pizza Midwestern because despite the fresh, European like composition of ingredients in the trendsetter hood, something about the crust reminded me of the pizzas I ate growing up in the Midwest. The crust has perfect elasticity with a dusting of polenta and neither thick, nor thin with crisp bottom. The Norma and the Salsiccia were my favorites.

A relaxing choice of reasonably priced wines including by the carafe as well as beer and soft drinks. And for dessert, a selection of gelatos and some floats. 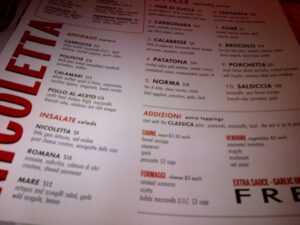 I mentioned to a bachelor friend that it’s a great date place if you don’t want to drop a car payment on someone you don’t know very well. Yet it is impressive enough a venue to convey that the choice of restaurant was made with great discernment.

Dinner for two with two drinks each, starters and a pizza for about $80 including tax and tip and that is called getting off easy these days in New York!