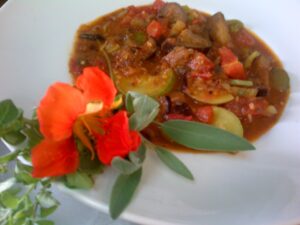 For any of you who have seen the movie Ratatouille, the story revolves around a mouse who becomes an unwitting chef after he makes a dish of seemingly lowly vegetables into a gourmet meal that catches the attention of a cynical, reknowned food critic dining at the restaurant. The title of this movie captures the difficulty of cooking something extradordinary with everyday vegetables and is worth seeing–with or without children.

One of my mother’s and grandmother’s favorite vegetables were eggplants along with tomatoes, peppers and zucchini; all the ingredients for Ratatouille. As a result, it was something that often appeared (in one form or another) on the dinner table during the late summer. Ratatouille as a side dish with whatever we were grilling that night. Ratatouille with yellow rice and salt cod fricasee, Ratatouille on toasted bread as a snack along with cheese, olives, and canned, smoked mussels (these days I smoke my own but that’s another post).

This past weekend I was the lucky recipient of a delivery of heirloom tomatoes and eggplant from a family friend visiting for a few days. She and her family keep a garden and grow beautiful tomatoes, peppers and greens. In addition to that I ran into Maryann Krupski from Mar-GeneFarms at the Greenport Farmers Market. They grow organic vegetables on their farm in Southold also have beautiful tomatoes, onions and zucchini. Then I realized I needed to use all these tomatoes at their peak so it was a day of making Manhattan clam chowder, tomato sauce and last but not least, Ratatouille.  I hope you’ll try this recipe or share your version with me.

2. Increase heat to high; stir in the zucchini, eggplant, peppers, and tomatoes and season with salt and pepper. Uncover pot, transfer to the oven, and bake, stirring occasionally, until vegetables are tender and carmelized, about 1 1/2 hours.

Serve with a glass of Rose of Merlot from Raphael Vineyards and really capture the rest of summer!