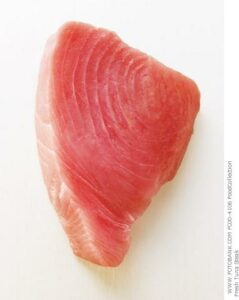 Sometimes I want something light for dinner but am still looking for a burst of low fat protein without the fat. There are few things more satisfying than buttery fresh Tuna, slightly seasoned and tossed with some crunchy fresh cucumber and red onion. If you live somewhere where you have access to fresh tuna from a local dock or purveyor, try to buy some of it as it’s worth the premium and a little goes a long way. During tuna season (From July through October) we use any of the tunas (Big eye, Yellowfin, Bluefin and Skipjack) coming from Montauk’s Gosman’s Dock just across the bay.

Always tell your fish monger that you are serving the tuna raw and be sure you don’t get the tail end of the loin as it will be fiberous and not appropriate for tartare.

Recipe for approximately five servings
Fresh tuna, 3 ounces per guest
So one pound despite the cost will go a long way.

Cube and chop tuna and refridgerate until ready to season.  Cube and chop 2 tablespoons of English cucumber or Kirby cucumber, chop 2 tablespoons of red onion and set aside with tuna.
It is important to note that you should not prepare this dish until just before serving so do not combine condiments in advance or the citrus and soy will “cook” the raw tuna and it will change color and loose it’s fresh color.

In a non-reactive bowl add the chopped tuna. Add five teaspoons of soy sauce (one per every 3 oz serving of tuna).   2 teaspoons of Mirin, 1/2 teaspoon of fresh squeezed lime juice, 1/4 teaspoon of Wasabi, and two teaspoons of sesame oil and a few drop of Siracha to taste (be careful as Siracha is very spicy).   Add all the condiments including the cucumber, onion and sesame oil and toss gently.  Served individually in round molds or form one large mound and garnish with sliced cucumbers, pickled sushi ginger and sprinkle with sesame seeds.

This is a perfect first course followed by soup and salad featured in our next post.